The name of the island “Lefkada” routed from the name “Lefkas Petra” or “Lefkas Akra”, an ancient name of today’s Leukata, the southern cape of the island.

The wild white rocks of the cape where, according to, the poet Sapfo ended her life in the name of love, gave the name to the city, the Corinthians founded in Lefkada, and then to the entire island. According to geographer Stravonas they renamed the ancient city of Nirikos to Lefkada, capital of the island.

Humanity in Lefkada can be traced back to the Paleolithic era. The distinguished German archaeologist Wilhelm Dairepfeld, associate of Henry Schliemann in the Troy excavations, conducted extensive archaeological research in Nydri, and brought important findings from the copper age (2,000 B.C.) to light and hence started the theory that Lefkada can be identified with Homers Ithaca.

The ancient city of Nirikos, 7th century b.c., which was discovered in Kalligoni at Koulmos, was the island’s first capital. It was surrounded by a great wall, of which only a small part is left.
The history of Lefkada, from the 7th century b.c. after becoming a Corinthian colony up until the Roman conquer, is politically connected to the city of Corinthos, which Lefkada followed in all important events of the time: the Salamina naval battle, the battle of Platees, the Peloponnesian war as an ally to the Spartans and the expedition of Alexander the Great.

Strongly resisting to the Romans during the 3rd century B.C., Lefkada finally submits to the conqueror in the 2nd century. During the Roman occupation considerable projects were constructed, the stone bridge, to name one, which connected the island of Lefkada with Akarnania, and had a length of 700 meters. They also reconstructed the ancient wall. In 1204 the island was incorporated to the dominion of Hepiros, but from the year 1294 Lefakada came into the hands of the French, since it was given as an offering to John, Count of Orsini, who later built the nucleus of the Aghia Mavra Castle, still erect today at the island’s entrance.

The history of the island, since the 14th century and until it’s incorporation with the Greek state, is full of events – milestones of long historical adventure. In 1331 Lefkada was conquered by the Andigavians, while in 1334 it becomes the feud of the Georgie. 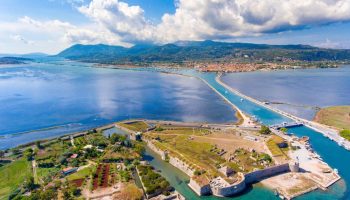 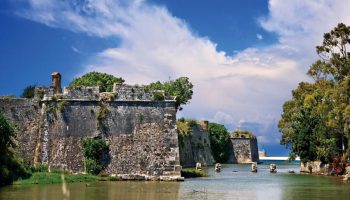 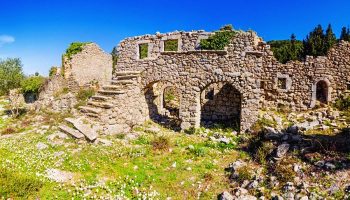 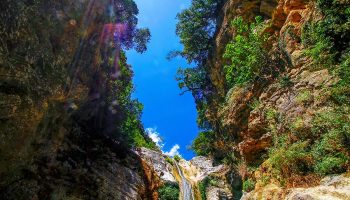 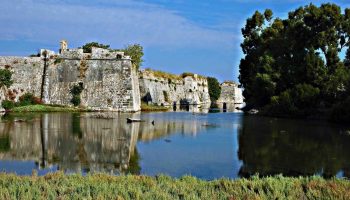 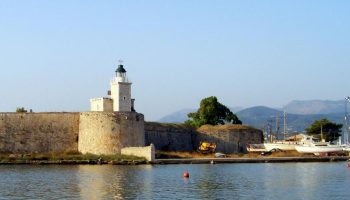 In 1357 the “Voukentra revolution”, the revolt of the islands farmers against the Gratian Georgie, arose, a fact that centuries later inspired the Lefkadite poet, Aristotelis Valaoritis, to write the famous work “Fotinos”.
In 1362 the island was passed on to the hands of the Tokki and in 1479 was conquered by the Ottomans, only to fall temporarily, for two years (1502-3) in the hands of the Venetians and then again back to the Turks, for a prolonged period of time that ended in 1684.

The same year the Venetians return. Lefkada was occupied by Fransisco Morozini, the capital was transferred outside the castle, at the position it remains up untill now, called Amaxiki and the Lefkadites loose control of the port and commerce falls in the hands of the Venetians.

The Venetian occupation is an especially difficult time for the Lefkadites, who were cut off from the rest of Greece and with the Venetians being indifferent in developing a cultural and social foundation, as they did in Zakynthos and Corfu, found it difficult to organize their social life and create their own cultural movement. However, during these years, the Venetians modernized public life by founding courts and setting the basis for organizing administrative services.

A period of continuous historic changes follows. The democratic French replace the Venetians in 1797 and immediately after that Lefkada as the rest of the Eptanisa falls under Russian – Turkish rule. From 1802 the island becomes a part of the Eptanesian State, the first semi independent Greek state, under Russian – Turkish protection.
In 1807 Lefkada is conquered by the imperial French only to fall in the hands of the British in 1810, who incorporate the island to United State of the Ionian Islands.

Despite the bits of democratic freedoms provided, the English rule was on of cruelty and heavy taxing to the poor Lefkadites, a measure resulting in the revolt of the peasants. During that time, however, many public projects were constructed, such as roads, bridges and aqueducts.

The union of Lefkada as well as the rest of the Eptanisa to Greece happened in 1864 when, after Otto’s removal, came George the 1st to the throne.

For a few years the civil class prospered and commerce especially developed. However in the beginning of the 20th century, the year 1900, peronospora a plants disease, destroyed all the islands vineyards, sending into poverty and despair the inhabitants. Then begun the great emigration to America and Canada, which lessened only after the end of the great wars of the century, where life in Lefkada improved significantly in the beginning of the sixties.

Scroll Up
We use cookies to ensure that we give you the best experience on our website. If you continue to use this site we will assume that you are happy with it.AcceptRead More